Discussions about the role of online political influence often centre around the internet giants. Disinformation can propagate on Facebook, and ranking certain political views over other ones in Google search results can sway elections. Despite the attention these two platforms command in our public – and legislative – discourse, the universe of online political influence includes a variety of other mechanisms that often go overlooked. One such technology stands out in particular. It has been used by political candidates in Australia, Sierra Leone, India, France, and more. It is becoming less expensive to deploy, and it can provide a means through which a political campaign may collect your personal information without your consent. This is the modern campaigning app. 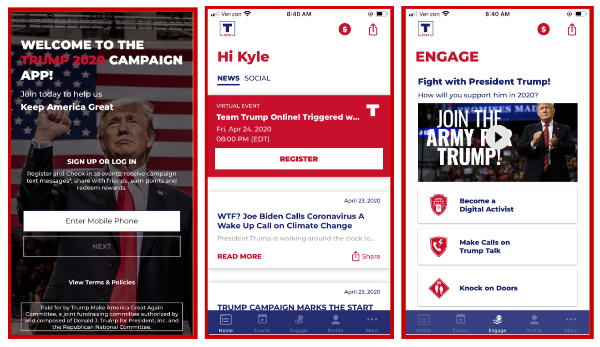 Screenshots of the official Trump 2020 app. Political candidates around the world are releasing campaign apps ostensibly to connect with their base. Under the surface, these apps collect personal data of users and of their networks to advance campaign goals. Source: ACRONYM

As the progressive nonprofit ACRONYM notes, the Trump 2020 app “immediately asks for a supporter’s cell phone number” after download and requires users to opt-in to text messages. Users “Fight with President Trump” by inviting friends to the app, making calls for the campaign, and canvassing, among other campaign initiatives. The Trump 2020 app also employs elements of gamification – things like point systems, rankings and rewards, which users accrue, all of which were previously reserved for literal games – to galvanize supporters of political candidates, a marked trend among political campaign apps. To be sure, enlisting mobile apps is not limited to conservative campaigns replete with funding. Down-ballot, progressive campaigns are also harnessing apps to broadcast campaign messages and leverage social networks. And increasingly, apps are also being used for canvassing, caucusing, and mobile voting experiments.

What does the proliferation of campaign apps mean for you? How do they collect our personal data, and what challenges do such technologies pose for our democracies? Tactical Tech’s piece “Campaign Apps: Tap to Participate” explains how these technologies work and why we should care.

The Glass Room presents Capsule 2.0, 'Nothing Personal?', our latest showcase of digital objects, both old and new. This second capsule explores how technologies are designed, branded and engineered to collect deeply personal data and influence our real-time behaviours.

Tactical Tech is looking for a committed and engaged individual to join our Data and Politics team as a Project Coordinator.

The National Resistance Movement App and Digital Politics in Uganda

The final part of our Data & Politics series on Medium looks at campaign apps around the 2021 election in Uganda, in cooperation with The App Analyst.

How was a mobile phone shop in Vietnam able to access personal data from voters in Ghana? The third part of our Data & Politics series on Medium looks at campaign apps in the 2020 Ghanaian election.

Civil society organisers rely on personal data and data-driven tactics to support individuals and groups. Find out about the importance of a data policy in this latest article from our Data & Activism project.

The second in this series of articles on Medium from our Data & Politics project looks at how the 'appification' of nearly every aspect of our lives has spread to politics, elections and issue campaigning.

Personal Data and the Influence Industry in Nigerian Elections

We are excited to announce the launch of our new report 'Personal Data and the Influence Industry in Nigerian Elections' in partnership with CDD West Africa, which highlights techniques and technologies used by political actors in recent campaigns in Nigeria.

Tactical Tech’s Data & Politics Team is excited to announce that the Swedish Postcode Foundation will support our latest initiative to create transparency on the use of personal data in political campaigns and the surrounding influence industry.

Elections — There’s An App for That

Our Data & Politics team has teamed up with The App Analyst to explore the personal data collected by election campaign apps. Read more on Medium - or nominate an app for analysis!

How many trees does it take to power the internet?

You may already know that airplanes, fast fashion and factory farming are harmful to the environment, but have you ever considered the carbon footprint of watching videos or sending emails? Find out more in a new chapter of the Data Detox Kit!

Together with partners from across the globe, Data & Politics' flagship report and guide 'Personal Data: Political Persuasion. Inside the Influence Industry' is now available in Arabic, Hausa, Khmer, Russian, Spanish and Ukrainian.

If Europe’s elections are to remain contests of campaigns’ political ideas and not of their digital strategies, the systemic challenges to democracy must not be overlooked by the fires of the present moment. Varoon Bashyakarla from our Data & Politics team writes for the Heinrich-Böll-Stiftung.

In order to investigate the 'Influence Industry' in different contexts and countries, our Data & Politics project has partnered with a diverse range of organisations and individuals in the Global South. Find out more about the work these partners do.

A Voter's Guide: 7 Tips to Detox Your Data

Our Voter’s Guide explains how personal data is collected and used by political parties and candidates – and what voters can do about it. The seven tips are now available in both English and Dutch.

Your Data, Our Democracy

As elections become increasingly data-intensive, our personal data is becoming a political asset for campaigns to leverage. This new animation, in English and Dutch, explains how this process happens - and what we can do about it.

The 'Influence Industry' In Sub-Saharan Africa

A new report, based on a roundtable with regional experts, looks at how the 'Influence Industry' operates in Sub-Saharan Africa. Read a summary on Medium by Amber Macintyre from our Data & Politics team.

The latest of over a dozen country studies from our Data & Politics team, carried out in collaboration with partners around the world, looks at the role of personal data in Dutch politics.

Our co-founder Stephanie Hankey writes on Medium about misinformation on WhatsApp.

From Exposing the Invisible - The Kit: Two investigators trace their process of creating the project ad.watch, an open-research-style investigation into political advertising on Facebook. This case study follows the project’s evolution from a limited endeavour to a growing resource that facilitates investigations on political ads around the world.

As The World Goes Online, Politics is There to Meet Us

As the world goes online amid the coronavirus pandemic, it is no surprise that politics is moving online too. Tactical Tech’s Data and Politics Team have identified five digital campaigning trends that we’re likely to see more of in the coming weeks and months.

Visit our other current projects

Tactical Tech is an international NGO that engages with citizens and civil-society organisations to explore and mitigate the impacts of technology on society.

→︎ More about us

Subscribe to our newsletter In the Loop to receive updates about our latest activities.

Is What You See Really What You Get?

Navigating Libraries and Archives for Investigations

Visit our other current projects